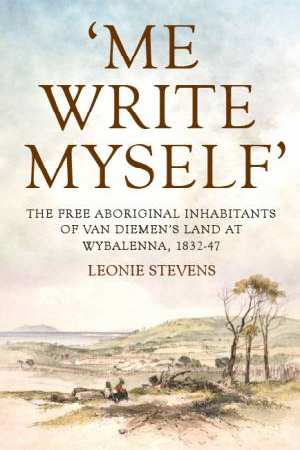 The Free Aboriginal Inhabitants of Van Diemen’s Land at Wybalenna

“Exiles, lost souls, remnants of a dying race… The fate of the First Nations peoples of Van Diemen’s Land is one of the most infamous chapters in Australian, and world, history. The men, women and children exiled to Flinders Island in the 1830s and 40s have often been written about, but never allowed to speak for themselves. This book changes that.

Penned by the exiles during their fifteen years at the settlement called Wybalenna, items in the Flinders Island Chronicle, sermons, letter and petitions offer a compelling corrective to traditional portayals of a hopeless, dispossesed, illiterate people’s final days. Seen through their own writing, the community at Wybalenna was vibrant, complex and evolving. Rather than a depressed people simply waiting for death, their own words reveal a politically astute community engaged in a fifteen year campaign for their own freedom: one which was ultimately successful.

Me Write Myself is a compelling story that will profoundly affect understandings of Tasmanian and Australian history.”