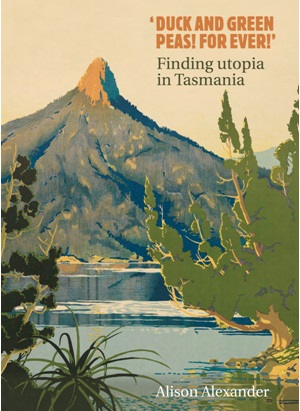 ‘Duck and green peas! For ever!’ This was a convict girl’s version of utopia in Tasmania. A beautiful heart-shaped island in the southern sea, surely this was a good place to look for your heart’s desire.

How many other people have searched for or stumbled upon utopia in Tasmania? Quite a few, as it turns out. They range from Aborigines to modern commune-dwellers, from scheming settlers to hopeful farmers, from young families escaping the devastation of war in Europe to those building a bomb-proof bunker in the Tasmania bush.

They looked to find utopia in the most unlikely places – Port Davey, Elephant Pass, Jackey’s Marsh, Cygnet, Lake Pedder, Castra. Some hoped to bring about utopia by political means; some dreamed of individual utopias. Sometimes they succeeded. Sometimes they failed. This book tells their stories.